Sixth in the table, albeit several teams around them have a game in hand,  and only three points off the Champions League places after Wednesday night’s 1-0 win against Everton.

It was Miguel Almiron’s goal which downed the Toffees, with the Paraguayan currently in red-hot form – just months after he was mocked by Manchester City’s Jack Grealish. 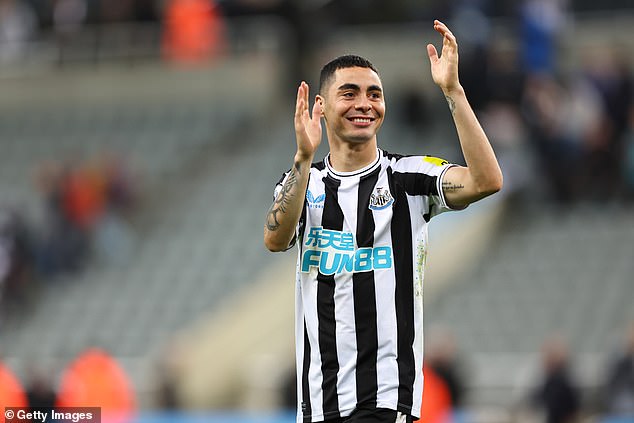 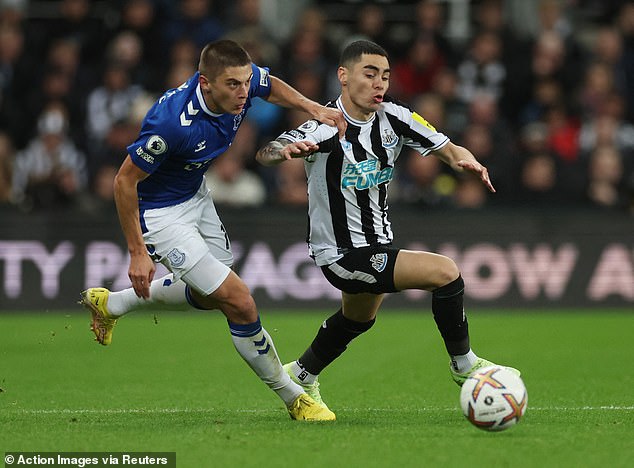 Almiron has four Premier League goals in October – as many as Grealish has scored in more than a year with the Premier League champions – and has been a key factor in the Magpies’ rise to the brink of the European slots.

But there are plenty of other aspects to their resurgence, with a league-leading defence, a new style of play and a family atmosphere fostered behind the scenes by manager Eddie Howe crucial to their success too.

Below, Sportsmail takes a look at one of the most in-form teams in England – and analyses just how they have done it. 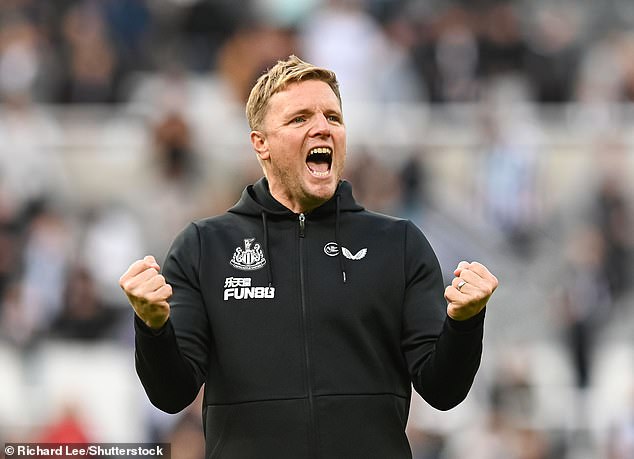 But there are plenty of other aspects to their resurgence with Howe – below, Sportsmail takes a look at one of the most in-form teams in England and analyses just how they have done it

Grealish, during his drunken celebrations of City’s Premier League title in May, was filmed cruelly mocking Almiron.

In a video clip on social media, when asked by team-mate Bernardo Silva for the secret behind their title win, the £100million man said: ‘There were two secrets. One, Riyad [Mahrez], take him off the pitch, as soon as possible. He played like Almiron. 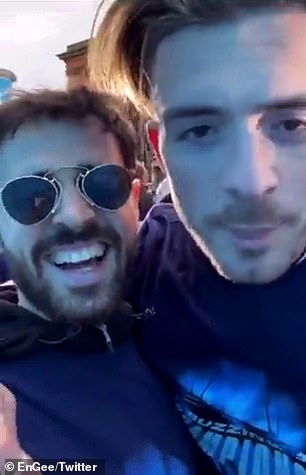 ‘Number two, [pointing at Silva] he’s been so good this season, get him off the pitch.’ The Portuguese then came up with a third secret, adding: ‘Number three… keep Jack Grealish on the f***ing bench.’

Almiron is a fan favourite at St James’ Park due to his evident commitment, work rate and determination, but has often struggled for goals, with four (in 2019-20 and 2020-21) his previous highest totals across a whole season.

However, he has already surpassed that figure before November and could be on for 10-15 goals at this rate, which would represent an excellent return as he steps up his output in the absence of key winger Allan Saint-Maximin.

His total of five goals in his last 11 matches is the same as he managed in his previous 64.

Almiron, 28, after signing for a then-club record of £21m in January 2019, has always had the quality and was one of the best in the US while at MLS side Atlanta United, but is now delivering on that far more consistently.

The 47-cap international was symbolic of Newcastle’s struggles under Steve Bruce: workmanlike but inefficient, with a lack of self-belief. Now he embodies their resurgence with his energy, tireless pressing and sky-high confidence.

With how he’s performing, there could be plenty more perfectly aimed left-footed screamers to come. 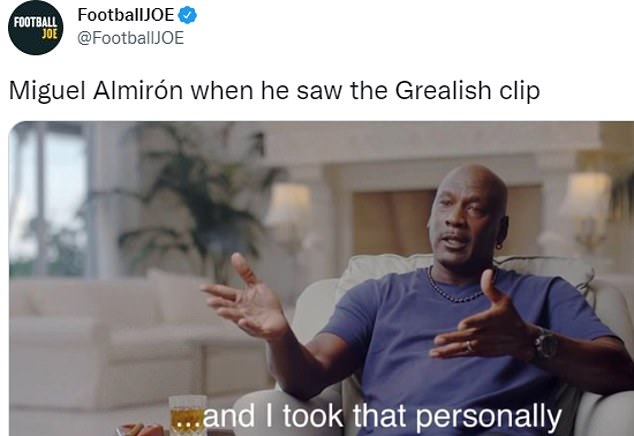 Since Grealish’s cruel joke, Almiron has outscored him five to one, and netted as many so far in October as Grealish has in his entire City career since joining for nine figures in August 2021

Best defence in the league

You would have got long odds on Newcastle having the best defence in the Premier League this season.

Of course, there’s a long way to go. But the early signs are very promising. The club over the last few years has almost been synonymous with a leaky defence, with a whopping 62 conceded last season despite Howe’s arrival in November.

That was 13 more than relegated Burnley and almost double as many as Chelsea (33). This campaign, they’ve conceded a league-leading low of nine, with Chelsea, leaders Arsenal and City having conceded 10, and have recorded five clean sheets.

True, three of Howe’s first-choice back four at the moment are new players, with only Fabian Schar at the club before the former Bournemouth manager arrived, and the initial spending has been high.

But Dan Burn and Kieran Trippier arrived for a combined £25m, and although the signing of Lille centre half Sven Botman this summer set them back more than £30m, they have been forged into a resolute defensive unit.

Burn is the 6ft 7ins hometown lad who is proving a steal, Trippier is the leader – and brilliant set-piece taker – the side needed, Botman is who they always wanted and Schar, unwanted under previous manager Steve Bruce, is a fine ball-player too.

With a measured and considered approach to recruitment, consistency in selection has bred familiarity and understanding. Full-backs Matt Targett and Emil Krafth are well capable of stepping in when needed as well – although the latter is currently injured.

It goes without saying that the £10m arrival of goalkeeper Nick Pope from Burnley has been a masterstroke. One of the best-value signings of the summer, and key to the often impregnable Newcastle backline. Howe has certainly built from the back. 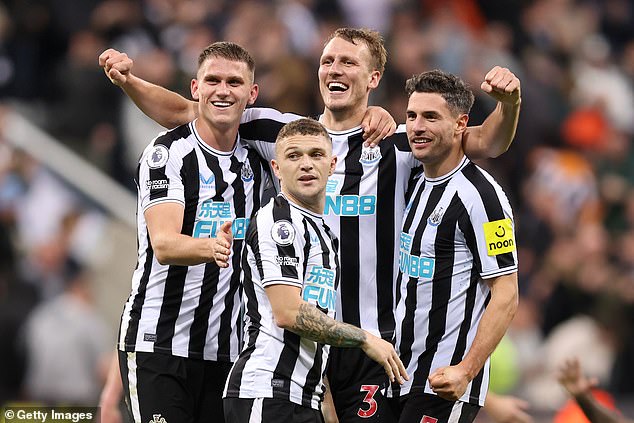 The resilient, dogged side currently hold the best defensive record in the Premier League 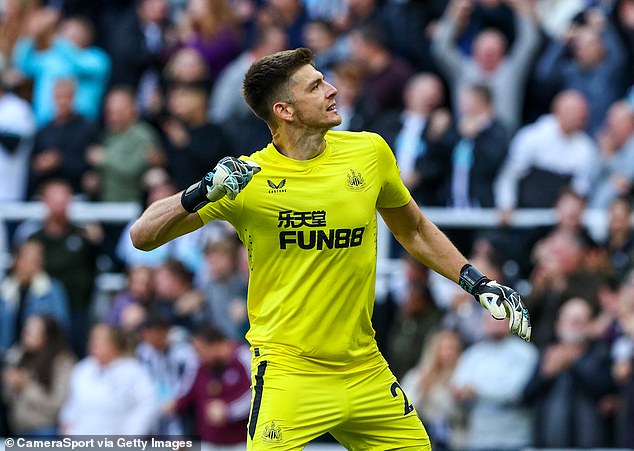 Fans can see just how much Howe has revolutionised the style of play, with Newcastle now much more energetic, cleverer with their approach and more progressive in possession.

United also managed, on average, 11.4 shots per game before the 44-year-old’s appointment. This figure is dwarfed by the 15.4 per game fans have observed since August.

The expected goals figure (xG) is 1.62 per game under Howe, exceeding his predecessor Steve Bruce’s average total of 0.84, with his Premier League win percentage (45 per cent) comfortably better than Bruce’s 27 per cent.

His overall win record is the joint fourth-best among any permanent Newcastle manager in history, with his 46.67 win percentage level with Sir Bobby Robson and behind only George Martin (49.03), Kevin Keegan (54.98) and Chris Hughton (59.38).

What’s arguably more important than the statistics, though, is the feeling around the club. The feeling players are really giving it a go, trying their hardest and are competitive against anyone – especially at fortress St James’ Park.

After years of stagnation under former owner Mike Ashley and Bruce, it feels like they’re finally going somewhere.

There has unquestionably been huge investment from new owners PIF, the sovereign wealth fund of Saudi Arabia, the Arab country with a shockingly bad record of executions, human rights abuses, a lack of press freedom and widespread persecution of women, minorities and LGBT+ people.

This cash influx was crucial, particularly as splashing out £90m – money their relegation rivals did not and could not spend – on Bruno Guimaraes, Chris Wood, Burn and Trippier in January clearly propelled them away from relegation.

North Shields-born Longstaff, who had serious doubts over his future at the club, is back to the form that once saw him linked to Manchester United.

While Howe’s style has worked perfectly for Murphy, who has never fully been able to nail down a starting place in his five seasons on Tyneside, but is now filling in capably for Saint-Maximin and is a valued squad player.

Howe making almost every player in the squad feel involved is testament to his man-management and helps unite the dressing room. 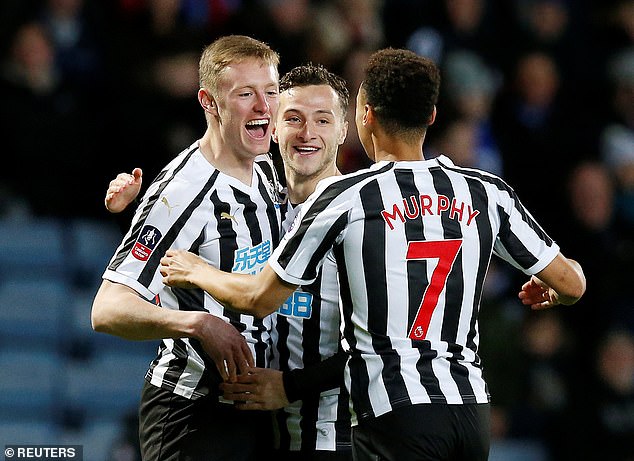 Howe has united the club behind the scenes too, making several appointments to fit his vision and aligning the club with his philosophy.

Especially after the loathing and disunity Ashley era, he is credited with making Newcastle feel like a family and bringing everyone together off the pitch as well as on it.

The Athletic journalist David Ornstein said: ‘I think he made an immediate impact, Eddie Howe, even if it wasn’t necessarily in front of our eyes with results on the pitch; the atmosphere around the club was just transformed.

‘Of course, that was partly because Mike Ashley had been replaced as owner, who wasn’t popular there with the majority of the fans, but also, they believed in Eddie Howe, he seemed a good fit in terms of his character, his acumen, his skills, his standing in the game and where the Newcastle fans felt that he could take them.

‘Then you hear behind the scenes as well, you speak to people at that club around the game, people linked to Newcastle United, and they talk very highly of him.

‘In the way he set about it on the training field, in the dressing room, one-to-one and collectively with the players; starting to bring in members of staff, sports science, coaching, recruitment and so on.’

Newcastle really do look on the up. 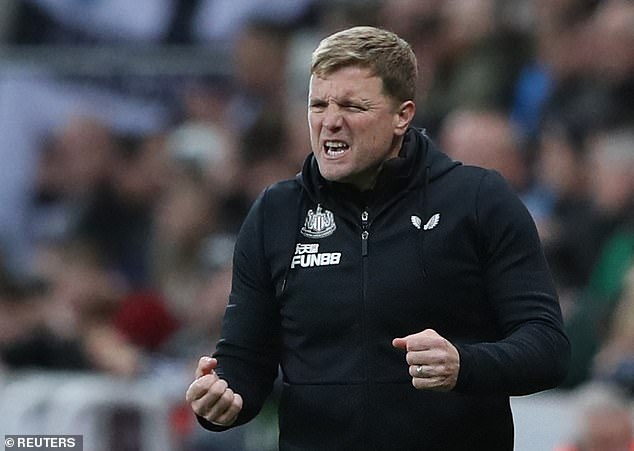 The London Stadium drops the price tag of its cheapest pint by only 70 PENCE to £6.60